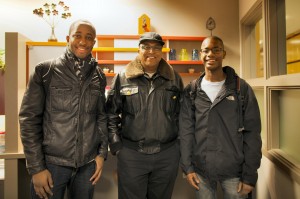 Last Friday I had the privilege of meeting with the Fred and Louise Tarver Scholars for 2012-2013.  Both of these young men are students in the College of Engineering at University of Michigan – Ann Arbor.  Caleb Brazier (L), a graduate of Cass Tech in Detroit, will graduate from U-M next April with a degree in Computer Science, and has already accepted a job offer from Microsoft Corporation in Seattle.  Charles White (R), an incoming freshman from West Bloomfield High School, also plans to major in Computer Science.  I’m proud of both young men — they are outstanding scholars and potential future leaders.

The Fred and Louise Tarver Scholarship, established in 1996, is a permanent full-tuition merit based scholarship at the University of Michigan.  Its purpose is to recognize and support students in the College of Engineering who embody the legacy of hard work, perseverance, and achievement that my parents demonstrated.