A victory of sorts, but the issue remains. 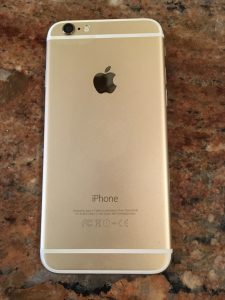 It has now been more than a month since I was scammed out of my iPhone 6, as described in my earlier post on the subject.  I’ve had several calls and email exchanges with eBay “customer service” agents and supervisors who have done absolutely nothing but say that nothing can or would be done.  Well, just this morning, as I was spreading the last of my blackberry jam on my English muffin top at a local restaurant, I received a call from an 801 exchange – UTAH!  A real, live eBay exec by the name of Danny Faust was on the other end of the line.  He said that as a result of my blog post and the subsequent article on the eCommerceBytes blog, executives at eBay had taken a look at my case, and that as a result, they determined the following:

The result of the above, per Mr. Faust, was that eBay was refunding the $328.00 payment that they froze and subsequently removed from my PayPal account.

That’s nice, but I wouldn’t have spent a total of more than 16 hours these past few weeks pursuing this matter just to receive $328.00. My hourly rate is much higher than that.  I explained to Mr. Faust that the real issue is that I no longer have confidence that I can place an item for sale on eBay without being scammed, especially if the item is a popular piece of electronics.  Mr. Faust said he completely understood, and that eBay was taking steps to address the fraud being perpetrated by unscrupulous buyers as a result of their Money Back Guarantee policy. He said that eBay execs now realize that the pendulum has swung too far in the direction of buyers, and that a correction is warranted.  We’ll see.  If that is indeed what happens now, my time and grief over this past month, and the time and grief of many others who have been complaining about this issue for some time (and who graciously offered help and suggestions in response to my post), will have been well worth it.

I agreed with Mr. Faust that there are unscrupulous sellers as well as unscrupulous buyers.  I also understand that, with millions of eBay transactions taking place every day, it is impossible for eBay to know the facts of every disputed transaction and make a competent judgement, especially since their “customer service” agents don’t seem competent to do anything other than execute clearly stated, simple policies.  However, the facts of my case could have been easily determined from the transaction record by a competent “customer service” agent or supervisor, and that is a training issue that can and must be addressed by eBay.  Also, eBay’s policy is not even-handed – they are making a de facto judgement in favor of the buyer when they take control of the seller’s PayPal account.

eBay has the potential to be a great marketplace, because of its wide geographical reach and enormous audience, but if the company allows scammers to damage the integrity of the system, the business model won’t be sustainable.  Innovation is needed to provide realistic assurance to both buyers and sellers, rather than a blind assumption that either one side or the other is always right.  The latter approach may make things easier for eBay in the short term, but it is just not fair.   I and many others in the eBay community are willing to offer solutions to the problem, if eBay would only ask.

I look forward to seeing how eBay will address this issue, if they do so at all.  I plan to keep pursuing the issue with the relevant authorities, and I hope that the many people who responded to my post will do so also.  I especially want to recognize and thank Ina Steiner of eCommerceBytes, because I am convinced that her article galvanized the support for my case and forced the response from eBay.  Mr. Faust said as much during our discussion.  I’m going to be following eCommerceBytes for news of any policy changes that eBay might implement.

Here’s my bottom line: until I see policy changes from eBay that convincingly address this buyer fraud issue, I won’t be offering anything of value for sale on eBay.

13 thoughts on “Seller Beware: The Response from eBay”