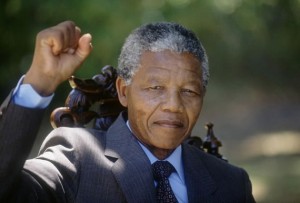 In the late 1980s, I was the young CEO of my own company, Telecom Analysis Systems, and Nelson Mandela had been languishing in prison for more than twenty years. I had an opportunity to sell some of my company’s products in South Africa, but I refused to do so — it was my own self-imposed sanction on the apartheid regime. When I proudly told one of my white sales reps, a good friend, about the decision, a heated argument ensued. I insisted that I wouldn’t sell anything to a company in South Africa until Mandela was free. He thought I was crazy to forego the sales opportunity.

A few years later, when Nelson Mandela made his first trip to the U.S. after being released from prison, I had the privilege of attending a reception held in his honor at Windows on the World, atop the World Trade Center in New York. I was so moved by that experience, and by the memory of that vehement argument with my sales rep, that I devoted a chapter of my book to it. The chapter is titled, “Mandela is Free, Bill,” and you can click on the link below to read it. I removed some pages in the middle of the chapter that are unrelated to the Mandela story.