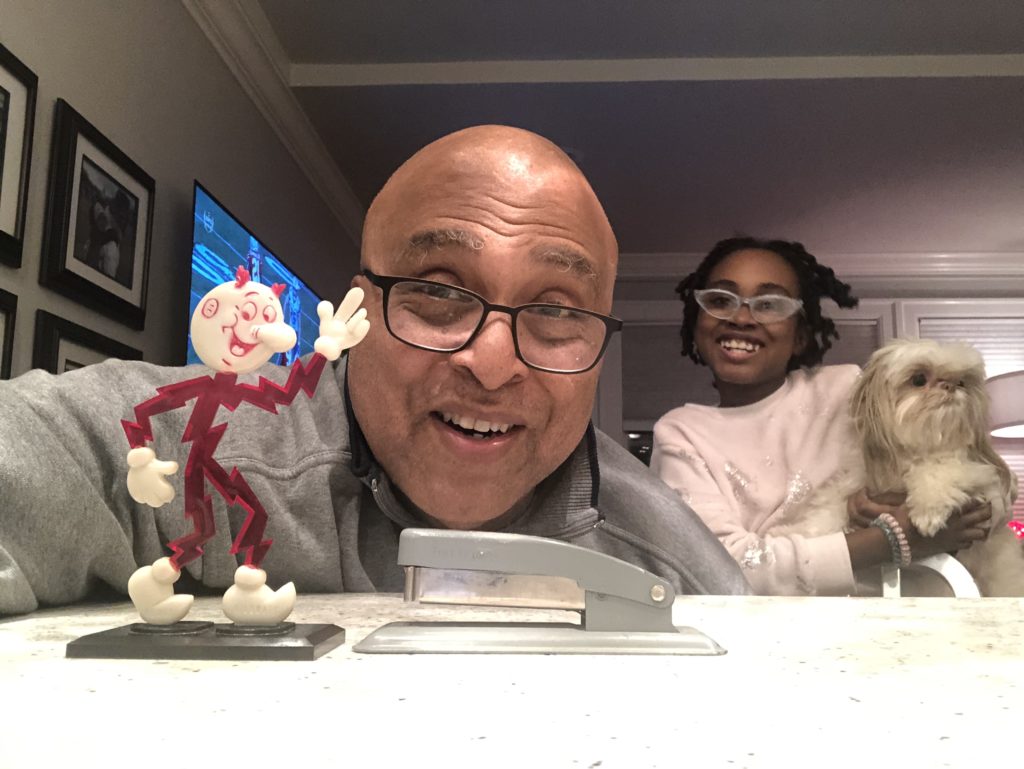 The little guy on the left is called Reddy Kilowatt, and I first encountered him when I was working as a summer intern at Consumers Power in Flint in the summer of 1969. Reddy was a fictional character at the center of an advertising campaign that was conceived at a time when power companies were trying to get people to use MORE electricity. The plate below the little guy looks like an electrical outlet, and Reddy is supposed to represent bolts of electricity flowing from the socket to power the modern world. The particular Reddy Kilowatt I first saw at Consumers Power was sitting near the workstation of a middle-aged female co-worker, and nearly every day I mentioned to her how much liked the little fella. I’m ashamed to say that when I left Consumers at the end of the summer, I took Reddy Kilowatt with me. Yes, I basically stole him. I think that’s the only time I ever stole anything in my life, and I felt terrible about it. Well, as karma would have it, when I was attending college at General Motors Institute (GMI, now Kettering University) a few years later, Reddy Killowatt disappeared from his perch on my dorm room shelf. Perhaps someone stole him. Perhaps he was reunited with his rightful owner. Whatever the case, I never saw him again.

During that same era, the 1960s, I took possession of my first stapler. I was in middle school (Whittier Junior High School) at the time, and the stapler I purchased was a Swingline Cub, probably from Carlton office supply in Flint. I can’t even imagine how many term papers and reports I fastened with that little stapler over the years, I never thought much about it, certainly not in the way I thought about Reddy Kilowatt. Perhaps that is why the darn thing followed me around for the next 50-plus years. From GMI, to University of Michigan, to New Jersey, back to Michigan, somehow the Swingline Cub was always there. Always, that is, until recently. About a month ago, I needed to staple something, so I searched in earnest for my Cub – to no avail. After a week or so of looking, I gave up and bought a new stapler. It was a plasticky, overdone model that was made in – you guessed it – China.

During the Thanksgiving holiday, while the kids were home, something brought the Reddy Kilowatt story to mind. On a lark, I checked eBay to see if a Reddy Kilowatt might be offered for sale. I saw lots of eBay items that contained the Reddy character – lapel pins, business card holders, and such – but nothing like the object I had seen at Consumers. Then I saw it – an eBay auction for an item that was exactly like the Reddy Kilowatt I remembered. And the auction was ending within the hour! I placed a last-second bid and won the item. When I told my kids about my winning bid, I could tell what they were thinking – that their dad was obsessing over some trivial little trinket. And they were right.

Several days later, Reddy arrived in the mail, and he was exactly like the one I, uh, obtained way back when. A few days after that, I was rummaging through one of the drawers in my bedroom when I encountered my little Swingline Cub stapler. Yes! I gladly returned my new China-built plastic stapler to the store for a refund.

So yes, call me a sick puppy. But tonight I’m in possession of two small things that came into my life more than 50 years ago. Perhaps my obsession with these seemingly trivial objects is a reaction to all the changes that have occurred in the world since my youth. Perhaps I’m reacting to the chaos and discord that is occurring in the world today.  Perhaps those two small things, lost and found, provide a tenuous connection to times and places and loved ones lost forever, except in memory.